Commit to the Bits

Commit to the Bits is a discovery project exploring the intersection of improvisational theater and Twitch live streaming. By applying factors unique to Twitch audiences such as their members’ mutual awareness and their potential for dramatic agency, we designed performative frameworks that embrace the character work, active decision-making, and role-playing inherent to improv.

We established the necessary design principles through methodical playtesting and rapid prototyping, quantitatively and qualitatively exploring the mediums’ overlap over the course of the semester. Take a look at our website to learn more!

Two performers start a scene of their own choosing. During the scene, the audience submits suggestions for characters, relationships, objectives, and locations. After a period of submissions, four random suggestions are selected (one from each category). Audience members vote on those suggestions until one is declared the winner.

After a short amount of time, the host or another performer shouts out “Freeze!” and the acting performers freeze in place. Another performer takes the place of one of those currently acting and starts a new scene based on the pose of the replaced performer and involving the winning suggestion from the audience. This game can be repeated indefinitely.

Whose Bag Is It Anyway? 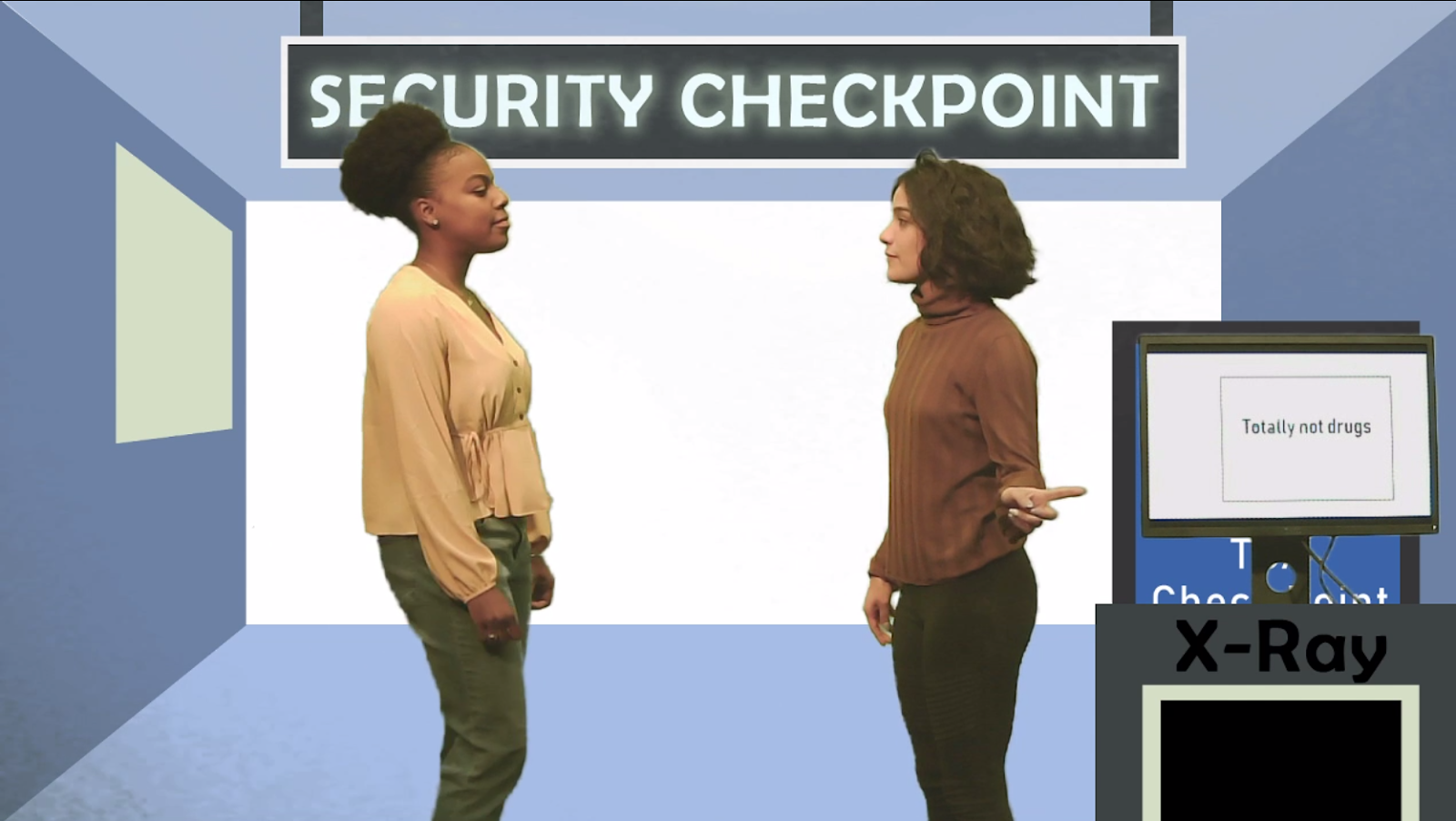 In this game, one performer takes on the role of an airport security agent, and the other a traveller. The traveller is trying to get through security by sending their luggage through baggage check, but the agent notices suspicious items inside. These items, which are submitted by audience members, show up on an x-ray visible to everyone. The traveller must justify the purpose of the items in their luggage and create an emergent narrative tying those objects into a story. Once the performers discuss about three items, they wrap up the scene. New performers then take the stage to start a new scene. Traditionally, the previous traveller becomes the new security guard. 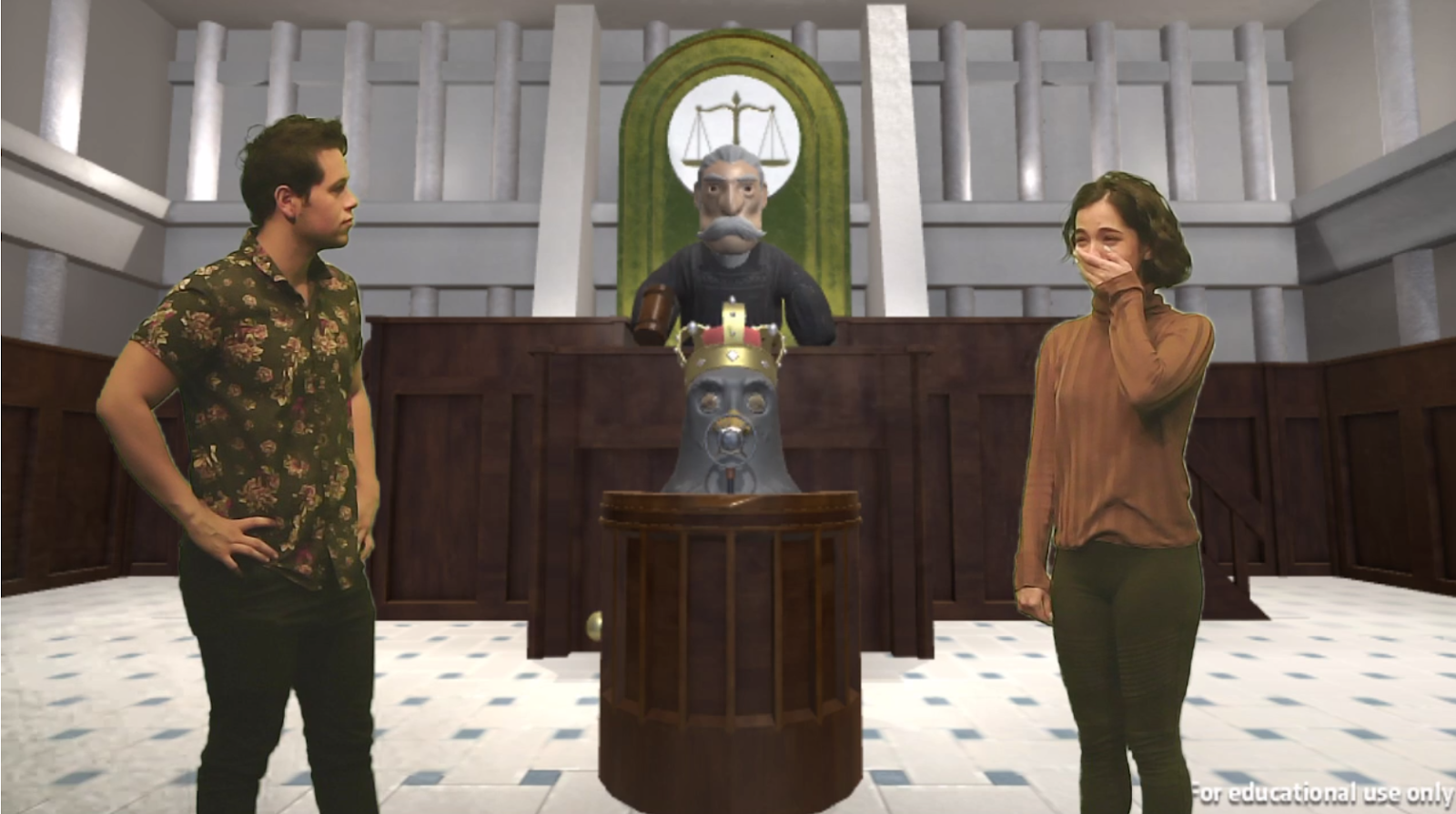 Discourt features two performers - a defendant and a prosecutor. When the scene starts, the prosecutor calls in a witness to testify against the defendant. This witness is an audience member that’s signed up to be called on the Discord social media platform. The witness provides a random statement to the prosecutor (I saw the defendant eating ice cream… with a fork!). The prosecutor and defendant talk back and forth about the statement until a new witness is called to the stand. Eventually, a story is formed from the many random statements put together. Once the scene has ended, a new prosecutor and witness can take the stage.

Music To My Peers

Two performers on stage ask the audience for a suggestion to start a scene. After receiving a suggestion from the chat, they start the scene. Meanwhile, audience members sign up to be a DJ. The DJ is randomly selected from the pool of willing participants. They pick a generic genre from a list of three available choices (picked randomly from a group of 20 genericized tracks such as Romance or Tragedy). This process is repeated twice more until they have a “playlist” of three songs. They’re encouraged to poll the audience to see what genres the audience wants.

During the scene performed on stage, the host changes the music according to the DJ’s playlist. The performers change the mood and tone of the scene to match the new music. Once all three music choices are finished, the improvisers wrap up the scene. New performers take the stage to start the next scene and a new DJ is selected. 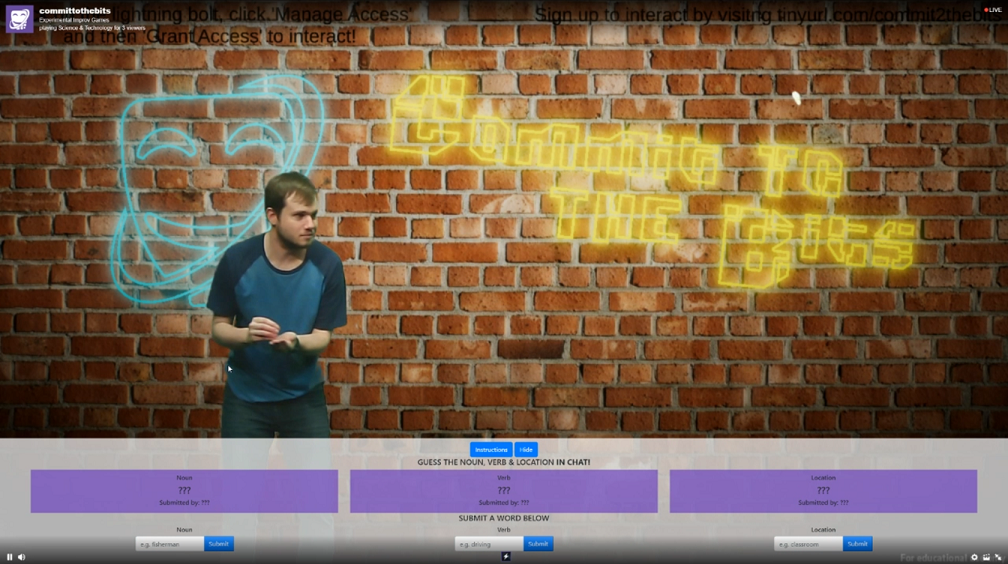 Guesstination Unknown is based loosely on charades. We wanted to create a game where audience members could play alongside the performers. Audience members submit noun, verb, and location suggestions to complete a concept in the format “A [Noun] [-ing Verb] in [Location].” All of the audience suggestions are randomized to create a single concept (A criminal dancing in Paris).

A single performer reads this concept but keeps it a secret from the audience. They perform a scene based on the concept. The audience members guess what the noun, verb, and location are until they collectively have all three correct.